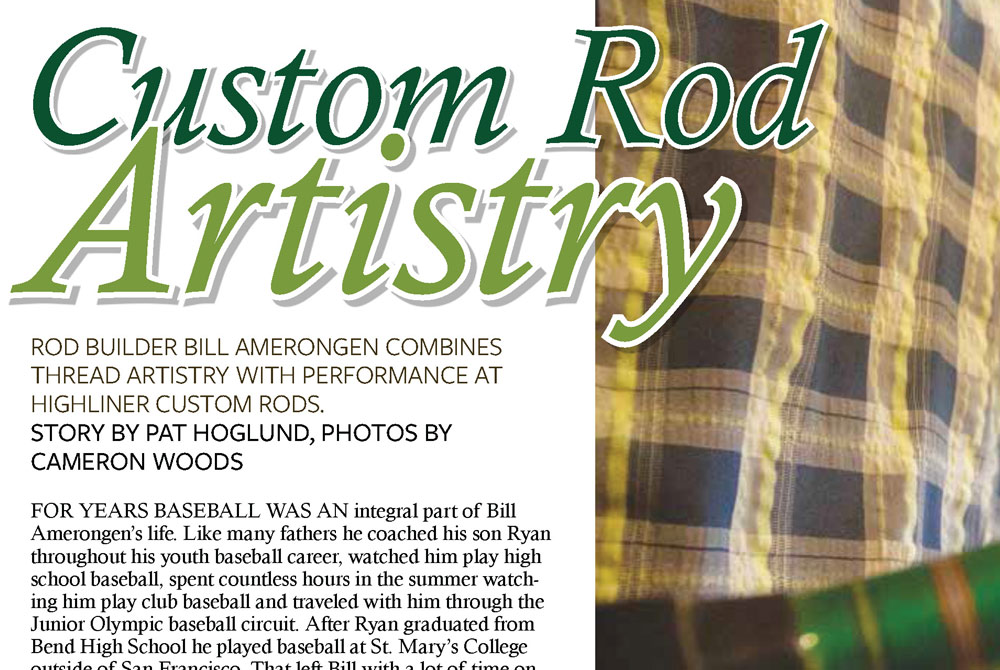 Bill Amerongen has been featured in a 6 page article at Salmon and Steelhead Journal. The article explores Bill’s attention to detail as well as some of the methods used in his craft that have earned him the position of one of the most elite rod makers in the world.

Here’s a couple samples from the article:

FOR YEARS BASEBALL WAS AN integral part of Bill Amerongen’s life. Like many fathers he coached his son Ryan throughout his youth baseball career, watched him play high school baseball, spent countless hours in the summer watching him play club baseball and traveled with him through the Junior Olympic baseball circuit. After Ryan graduated from Bend High School he played baseball at St. Mary’s College outside of San Francisco. That left Bill with a lot of time on his hands. Besides fishing, he needed something to do. At the urging of his wife, Bill started building custom fishing rods, something he’d done casually since he was 14 years old. “When Ryan graduated from high school and went down to St. Mary’s, all of our baseball stuff ended. That was unequivocally the highlight of my life, but there was just a vacuum when he left. So my wife said I need to get back into it.” What started out as a hobby turned into a full-fledged obsession. In 2008 he started his own business, Highligher Custom Rods. Today, Amerongen describes the number of rods he builds each year as small. His focus is on quality which involves lots of time, versus quantity. This makes sense once you witness the level of detail he puts into each rod.

It is the precision threadwork that Amerongen puts into each rod that has earned him the reputation as one of the best custom rod builders in the world. “People come to me because they want something special and one of a kind,” he says. Amerongen builds rods for anglers throughout the U.S., and across the world. He has one customer in the United Kingdom that has purchased 26 different rods from him. A few years ago he built a rod for a member of the U.S. military stationed at the US Embassy in Kabul, Afghanistan. And most recently he built a rod for someone in Viet Nam.